ChrissyTeigenWeb doesn't claim ownership of the images, videos or news posted on the website unless stated otherwise. We are in no way affiliated with Chrissy Teigen, her family, her friends, her agency or management. If there is any content appearing on this website that belongs to you and do not wish for it appear on this site, please contact us as soon as possible with a link to say which post and it will be promptly removed. All copyrighted materials posted on this blog documenting and illustrating our interests.
Chrissy Teigen Swipes Through All of the Secrets Hiding in Her Phone
Posted by Sushi    |    Filed in interview,news,videos
2

Chrissy Teigen may be an open book on social media (if you don’t follow her on Twitter, you are seriously missing out) but now she’s taking that reputation to another level. While being photographed for the April cover of Glamour, Teigen took a break to pull out her phone and share some of the most private things in it. “Hello, this is Chrissy Teigen, and this is where I give you the inside scoop of everything on my phone,” says the model in the video clip, before adding, “Uh-oh.”

The first revelation that comes from Teigen’s phone is her favorite video of her soon-to-be-one-year-old daughter Luna. “My favorite video of Luna,” Teigen says, was filmed while “we were in Italy. She’s exactly like me; she’s either 0 or 100. She’s like, next-level. There’s no hiding her emotions. When she’s happy, she’s so happy. When she’s mad, she’s so mad.”

Her most-used emoji? “I think it might be the knife,” says Teigen, before discovering that it’s actually “the wailing face,” which Teigen shared along with her impression of it.

Teigen also reveals what she considers to be the sexiest photo on her phone. The proud mother didn’t go with an outtake from one of the myriad shoots she’s done, but instead shared a naked pregnant selfie. “That’s pretty sexy,” she says. “This is the day before I gave birth, or the morning of. I think it’s sexy. I like it. John, do you approve?”

“I think it’s beautiful,” he says, speaking for everyone else on this planet as well. 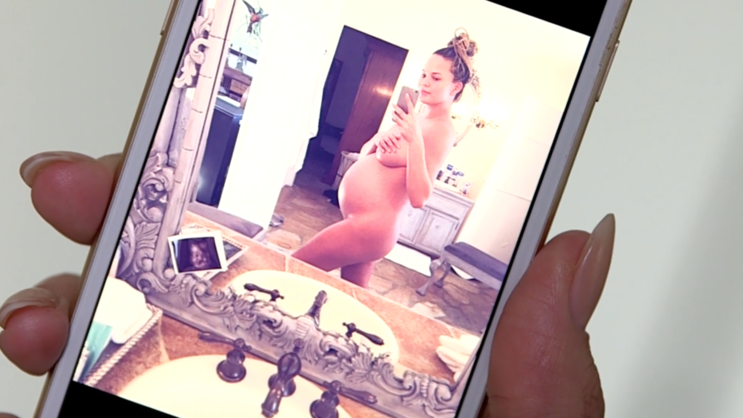